You Make 16 Squares and Waddya Get?

Another (few) days older and closer to done.....( about 80% of the Great Canadian British American Afghan complete to be exact-ish).  (Hmmm....that doesn't quite fit the tune.)

I think I've mentioned before that one of the benefits of blogging is seeing evidence of progress on your projects during those dark middle days where the sunny excitement of a 'new project' is long gone, and the light at the end of the tunnel hasn't yet appeared. 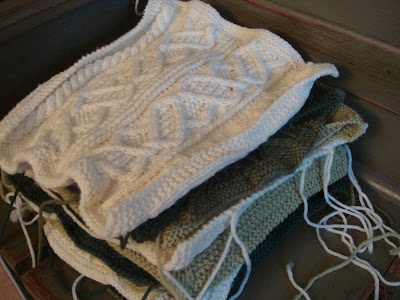 That's certainly the case here.  When I sat down to blog today I was feeling that I hadn't really accomplished much in the last week - but when I compared the photos to last weeks -- well it seems I'm zooming along! 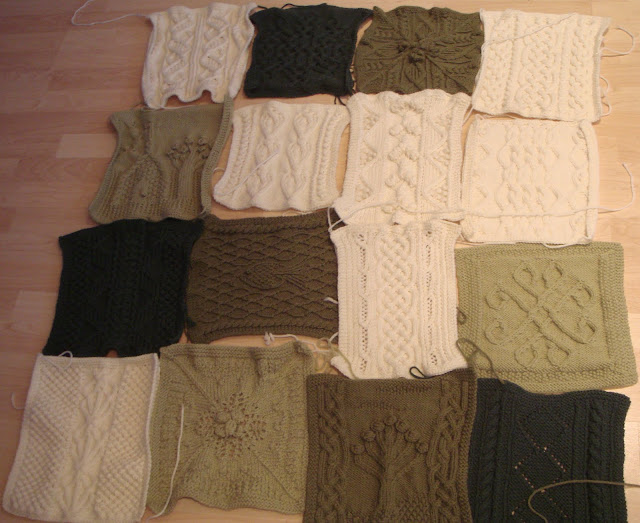 As a few people have commented - this pattern has become a firm favourite in the knitting world.  And I can see why.

First and foremost - the finished afghans that I've seen have all been pretty special.  It's one of those projects that you really can see being used for years and years.

Second - the sampler nature of the afghan means you get to try lots of different stitch combinations and techniques. There are cables and seed stitch and moss stitch and popcorn and bobbles and twisted stitches and seed stitch and..... I've doen lots of cable and texture work over the years - but I've definitely picked up a few tips and tricks already.

Finally, just as a pattern starts to get a little dull - it's time to cast off and start a new very different block!  Most are knit pretty much as you'd expect (ie cast on 60 ish stitches, knit 70ish rows in pattern) - but some are knit in the round (outside edge in) some are knit in strips and others are knit with a centre square and then have an outer border knit separately.  (And one very special square has its own little sweater to wear -- but I'm saving that for the end!!)
Posted by Soo at 19:53 3 comments: Links to this post

I think I've mentioned before how odd it is that some patterns you find and you immediately cast on, and others take a while to bubble up to the top of the knitting stack.  Maia, a few weeks ago was an example of one of the 'see, pick yarn, cast on NOW' variety -- my current project is clearly an example of the other! 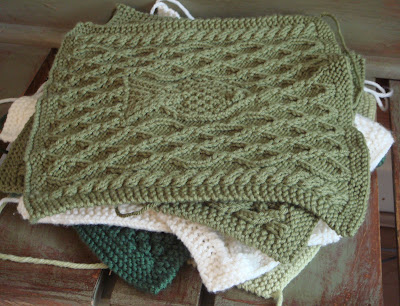 It's the Great American Afghan (or in my case the Great Canadian British American Afghan).  I first saw the afghan over on the Rainey Sisters' blog -- in fact it was the very first time I stumbled on the blog that remains one of my favourites.  I thought the afghan was gorgeous and decided to make one.

The afghan is made up of squares designed by readers of Knitters magazine as part of a contest a few years ago.  Theoretically each square is 12 inch square - but as you can see from this picture a bit of blocking and coaxing will be required to get these blocks to the same size!  Some research on Ravelry confirms that this is a common issue with the pattern so I've decided not to fret about it. 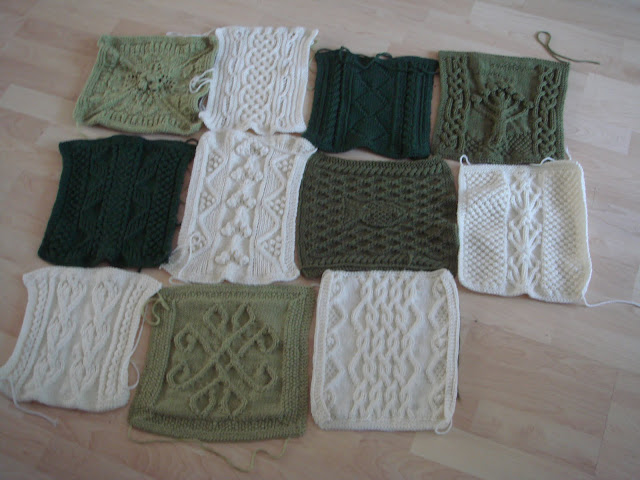 I'm using Rowan Pure Wool Aran (it's superwash) in 4 colours.  Cream will be the dominant colour making up a little over half the squares and the border  - while three shades of green will make up the rest.

I still waver with every square on whether I should have gone for a single colour or not - but for now I'm perservering with the different colours.

It's an enjoyable project - there is something very satisfying about knitting cables.   Blocks that can be picked up for a few minutes when I have the time are also perfect for me at the moment as knitting time is scarce.  (Work is currently very busy and will be for at least the next few weeks.)

So anyone out there who feels like they've been waiting forever for something to get knit by me - this project says there is hope!  (yes Caked Crusader that includes you and the very long overdue Lemur puppet sweater)
Posted by Soo at 18:19 10 comments: Links to this post

I just realised I haven't posted the pictures of Gen's birthday gift - Arielle by Kim Hargreaves.  Although - technically it ended up not being a birthday gift as I had a button crisis at the last minute followed by sleeve paralysis.

On the Saturday before her birthday brunch I was pretty close to being finished - just a bit more of the front, the neck edging, the cap sleeves and a bit of sewing - and I needed some buttons.  (Oddly, as I write that now it seems clear that there was no way that was all going to get done before the brunch.  Hind sight!) 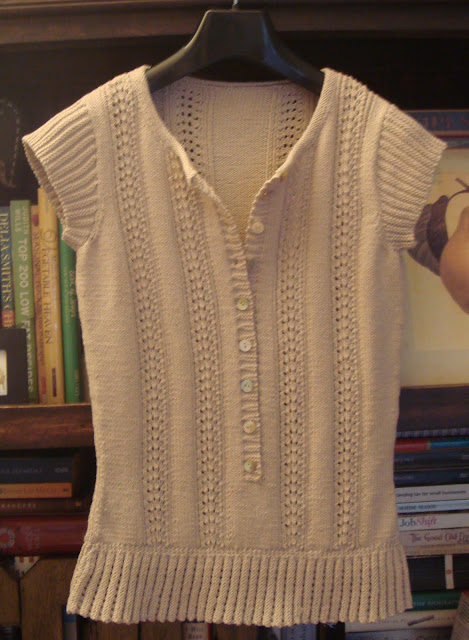 The button issue had me waffling between a shorter trip to a local-ish yarn shop - where I couldn't be sure they'd have the  right buttons but I'd have more knitting time - and a longer trip to John Lewis - where I knew they probably would have the right buttons but I'd lose valuable knitting time.
I managed to waste quite a bit of time debating the situation and eventually decided that the local-ish yarn shop was the way to go.
I was wrong.
Not only did they not have the right buttons - they didn't have any buttons.
So I hop on the tube and head up to John Lewis.  I do indeed find the right buttons (I buy 2 styles so I can compare and contrast later), and I do indeed waste most of the day's knitting time.
Not to be beaten by buttons I return home and knit up a storm.  I finish the front, and e neck edge and both sleeves in no time at all.  I seam up the sides.  I'm on a roll.  But...
But the sleeves seem way too small for the armhole.  Inches too small.  I pull at them a bit but they still seem too small.  I do a quick search and see many others have encountered the same problem when knitting this pattern.
I admit defeat and stuff the sweater into the knitting basket. In a fit of pique I ignored the sweater for a couple of weeks -- because clearly THAT will make the sleeves fit the armholes. 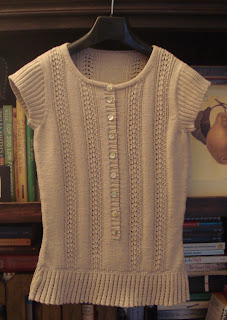 Finally, last weekend I pulled the sweater out and was considering re-knitting the sleeves adding in some extra rows when I decided that maybe - just maybe - if I steam blocked the garter rib they would fit. I gently stretched the sleeves holding the steam iron about an inch above the fabric and heh presto -- now they fit the armhole!
I like the finished sweater - and I think it will suit long and lean Gen very well - but I don't think it's a style that would suit shorter curvier frames.
I knit it in the recommended Rowan Fine Milk Cotton on 2.75mm needles.
Posted by Soo at 13:35 5 comments: Links to this post 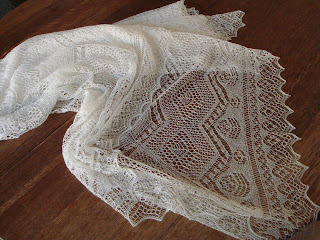 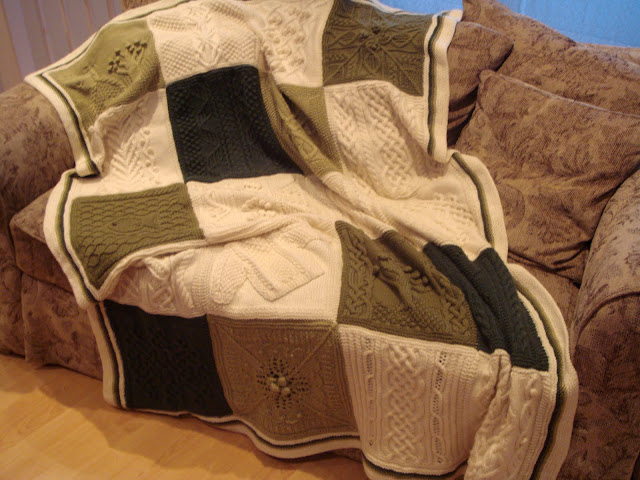